Go to: Forum List•Message List•New Topic•Search•Log In•Print View
Re: Rory Gallagher - The Late Great Genius.
Posted by: Hustler ()
Date: April 03, 2020 01:29PM
THANK YOU Preacher- for a thread I can get excited about!

My first exposure to the the great man came in 1973 via a promo copy of "Tattoo" that my 2 years older brother brought home from the radio station where he worked. I remember the songs "Tattoo'd Lady" and "A Million Miles Away" made an immediate impression- but it was the following year's "Irish Tour '74" album that first gave me a "taste" (see what I did there?) of what an incendiary live performer he was. Then he followed that up in 1975 with "Against The Grain"- an absolute corker of an album and possibly still my favorite. From then on, I was a totally sold first day buyer of everything and anything he did.

So here's my Rory story: January 1976, I'm still a senior in high school; my brother is off at Western Illinois University in Macomb, Illinois. He calls and says, "Hey, Rory Gallagher is gonna be playing up here along with Leslie West Band and Ted Nugent... you wanna come up?" Hell yeah- road trip!

My brother and I got in early to stake out a prime location down in front of the stage. We had also smuggled in among um, "other refreshments" a six pack of Guinness Stout (sneaking stuff in was so much easier in those days).

The playing order was Leslie, Rory, then Nugent. Leslie comes out and plays a great set (at that time he had a smoking solo band behind him: Mick Jones, Carmine Appice, and Kenny Aaronson). Then Rory comes out and absolutely kills it- he's kicking everyone's ass, my brother and I put a bottle of Guinness on the edge of the stage- Rory comes by there, picks it up and thanks us!! Everybody down front is going nuts, by the time Rory is done we're all buzzed and yelled out. Could easily have left happy after that.

Finally out comes Nugent- but by that point it’s anticlimactic (it's the midwest- the Amboy Dukes have been around here for years, we’ve seen Ted’s shtick many times and already regard him as a clown). but Nugent's band at the time (St. Holmes, Grange, and Davies) is hot, as is their S/T album- so we ignore Ted's antics and hang in to hear Stormtroopin', What the Doctor Ordered, and of course Stranglehold.

But it was Rory we came to see, and man he did not disappoint! An unforgettable night and favorite memory from my youth! 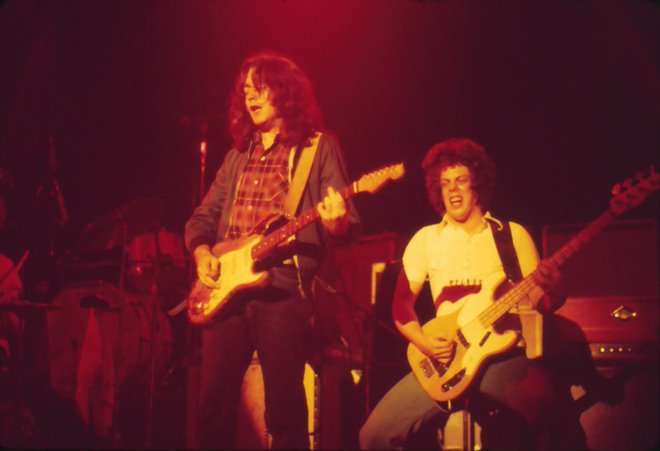 Go to: Forum List•Message List•Search•Log In
Sorry, only registered users may post in this forum.
Click here to login
Moderator: Andrew
Powered by Phorum.

Disclaimer: melodicrock.com takes no responsibility for the contents of messages posted on this open forum, or for the sanity of those posting.